Ecommerce Or E-Commerce | Write It The Right Way

Does your Google search show variations of ‘ecommerce’ when you search for it? Because at our end it does! So, when we type ecommerce, we get its variants like e-commerce, eCommerce, and e commerce, too.

This leads us to scratch our heads about whether we wrote it wrong or has Google gone bonkers? Is it Ecommerce or E-commerce or eCommerce or e-commerce? How do you spell Ecommerce properly? What’s the standard way to spell it? You know, things like that.

But before we start digging up the answers to these questions, first let’s have a quick recap of how ecommerce emerged.

A Brief History Of Ecommerce

Ecommerce basically stands for electronic commerce, and the Oxford Dictionary defines it as:

The proper dictionary-defined name for ecommerce is electronic commerce. Over the span of time, the word kept going through evolution just like a similar word i.e. email. Email is the shortened form of electronic mail. When it was first introduced in 1972 that is what it was called. Several spellings, hyphenations, and capitalizations arose through the years, but nothing stuck forever. And now we have the singularly spelt email.

Similarly, though the word electronic commerce is the original one, it has changed its shapes. And here we are confused between ecommerce or e-commerce or eCommerce.

We Turned To The Big Names

The confusion was getting to our nerves, so we fired up Google and opened a few literary sources. We wanted to search for how the most trusted intellectual sources are using the word.

We turned to Merriam-Webster; 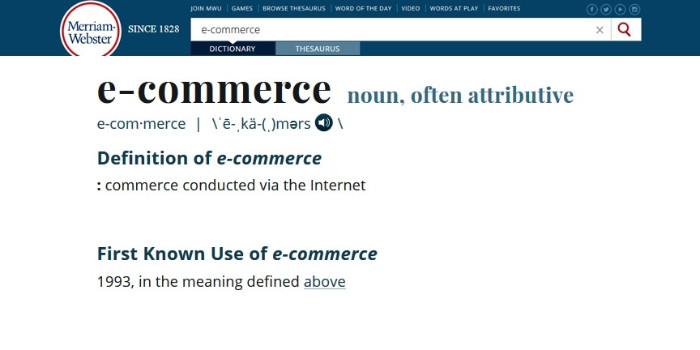 Although we typed ecommerce, it automatically changed it to e-commerce.

Then, we asked Cambridge; 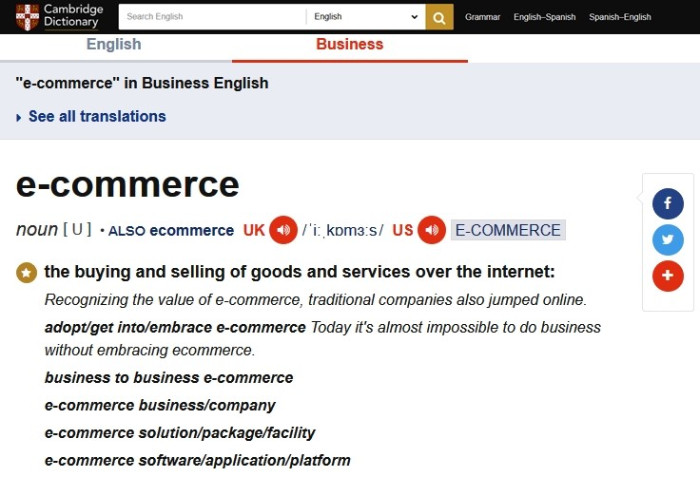 The results were similar as it also changed our ecommerce to e-commerce.

While the word may be in a transitional state now, in no time we’ll all settle for the singular spellings i.e. ecommerce, just like we did with email. This phenomenon of dropping the hyphen is basically dependent upon how common the word is. When e-mail entered the common usage, it became email. And we expect a similar development in e-commerce.

So, is it  Ecommerce or E-commerce?

Confused still? So were we.

So, what we did was look at the results from the guru Google.

We used to think that they’re all the same with no effect on the search results. But wait until you see this. 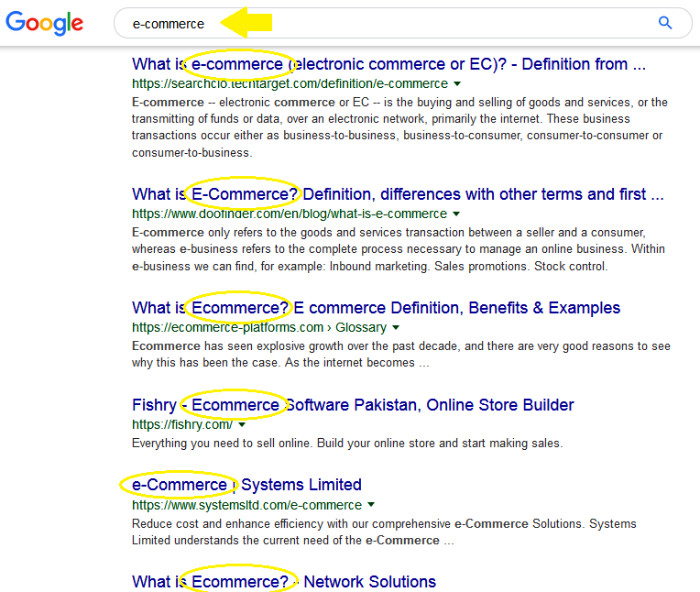 As most people believe e-commerce to be the dictionary-defined way of spelling it, we searched for it first. So, when we typed ‘e-commerce’ in the Google search bar we got mixed results. In the image above, we can clearly see that out of 6 results only 3 are what we searched for. The remaining 3 results feature a variant of the word i.e. ecommerce. 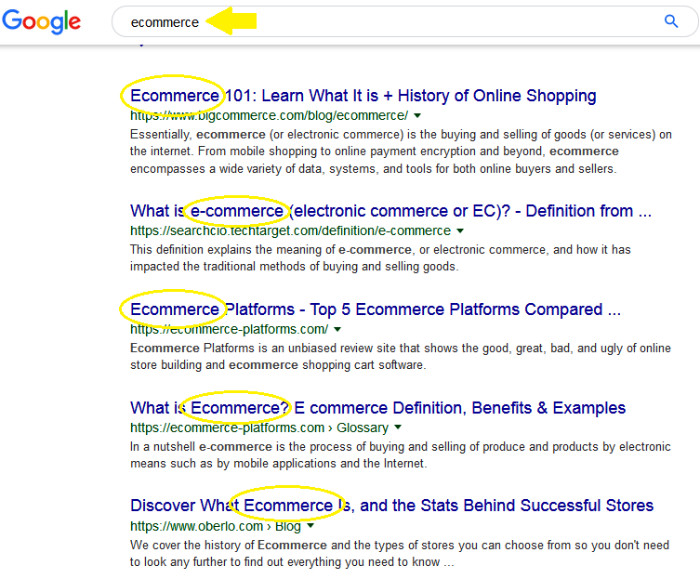 To clarify further we typed ‘ecommerce’ in the Google search bar, and the results were pretty much satisfactory. However, we can still see that one result features e-commerce instead of ecommerce. 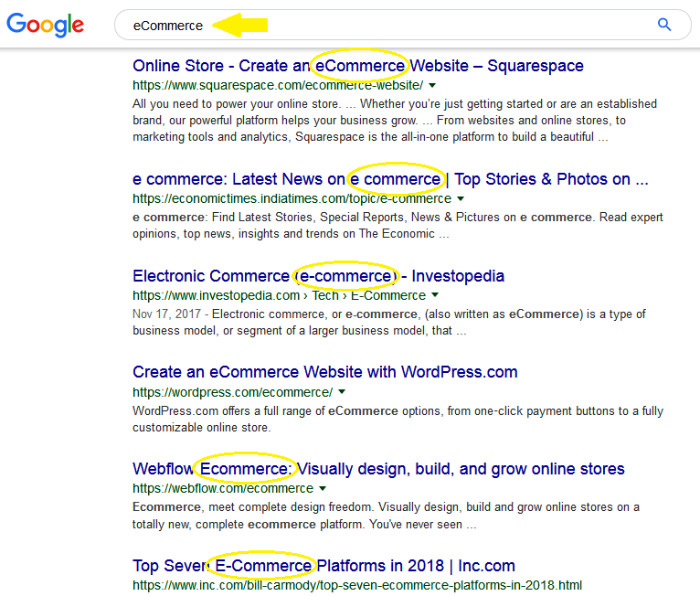 To settle this debate of ecommerce or e-commerce we even searched for another variation i.e. eCommerce. The results that we got were quite diverse. We got almost all the variants in the results including eCommerce, e commerce, e-commerce, Ecommerce and E-Commerce.

What Else Google Has To Say About It?

In order to get some more solid answers, we turned to Google Ngram. Google’s Ngram Viewer is a database that shows every instance of selected words occurring in all of Google’s archived books. We searched for all the data available between 2000 and 2008. We did that to retrieve the most recent results. Moreover, Google Ngram only has books archive until the year 2008.

So, when we put the words E-commerce, E-Commerce, eCommerce, Ecommerce, ECommerce in its search bar we get the following results:

The results that came up sort of clarified the confusion. According to Google Ngram, the word e-commerce is mentioned way more than eCommerce or even ecommerce.

Though the results were enough, we still turned to another source. We got a second opinion. And yes, Microsoft Word has an opinion of its own, too. 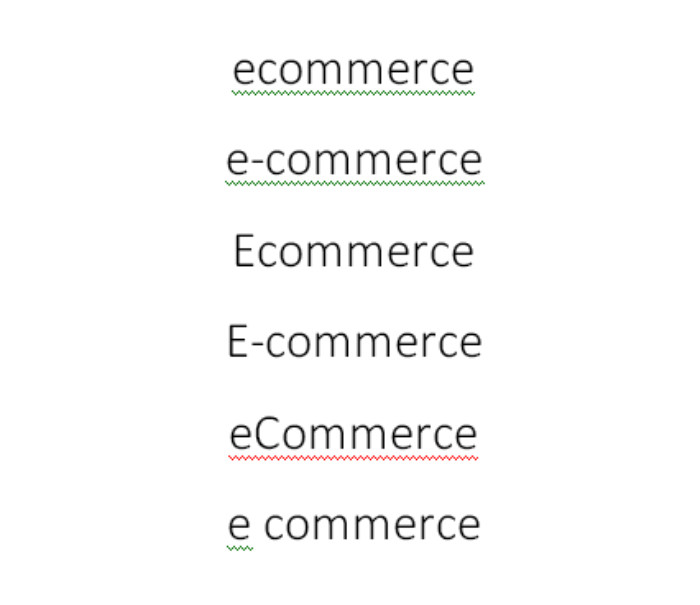 We typed all the popular variations of the word ecommerce and our friends at the Microsoft Word agree with just two.

So, how do you spell ecommerce again?

So, let’s see what we have found out:

How Can We Help?